Just like animals and human beings, plants too can be stressed. Whereas one may easily detect stress in animals and humans basing on their behavior, plant “behavior” is not easy to interpret.

Why should we be concerned about stress in plants?

Plants under stress cannot reproduce or grow well because they have to divert much of their physiological energy to fighting stress. If the plants are critical food crops, this will lead to perpetual food shortages because their energy resources are spent fighting stress.

A new study titled “Sandwich Enzyme-Linked Immunosorbent Assay for Quantification of Callose” and led by a team of scientists at the Department of Plant Sciences, Microbiology and Biotechnology at Makerere University in collaboration with the University of California, Davis, USA, shows how stress in plants can be measured. According to Prof. Arthur Tugume, the lead scientist of this study and expert in plant diseases, when plants are stressed, they produce numerous molecules within their cells mostly as means of adapting to stress or avoiding the impact of stress. “For example, plants produce reactive oxygen species like hydrogen peroxide, superoxide ions, and hydroxyl ions. These reactive oxygen species are produced rapidly and act as rapid messengers in the plant tissues to activate additional responses spreading over the entire plant body. This helps the plant to withstand or avoid the impact of stress”.

Dr. Ssenku E. Jamilu, a plant physiology expert on the team explains that in plants, stress can be induced by many factors such as pollution in the soil and atmosphere, high soil salinity (salt stress), excessive lack of water (drought), extreme temperatures, lack of oxygen (anoxia), excess radiation, mechanical injury by wounding or by pests that feed on the plants, and infestation by disease-causing microorganisms (pathogens). “Such factors are worsened by climate change, implying the importance of measuring their impact on individual plants to guide plant breeding programmes to ensure sustainable food production in the face of climate change”.

The research indicates that reactive oxygen species set in motion additional processes to ensure limited impact of stress on the plant. For example, a unique carbohydrate, named “callose” starts to accumulate in large quantities within plant cells as a means of fortifying plant cells. Callose differs from the other usual plant carbohydrates such as starch or cellulose because of the way its structures are formed. Also, the production of callose gets increased during stress. Callose acts as a road-block to any pathogen such as bacteria by limiting bacterial movement that would otherwise ease attack on other tissues or cells.

“If we can artificially induce the stress on the plant, and then measure the amount of reactive oxygen species or callose or any other responses in the plant, we should be able to directly and quantitatively measure the stress,” Prof. Tugume explains.

He however notes that callose participates in many other normal developmental processes of plants and for that reason, there is always some “housekeeping” callose in the plant tissues even without stress. “This means that one must be able to accurately and quantitatively distinguish between ‘stress-induced’ and normal ‘housekeeping’ callose”.

In this study, the researchers used young (2.5-months old) banana plantlets that had been generated from tissue culture at Kawanda Agricultural Research Institute. They then infected the plantlets with a bacterium called Xanthomonas campestris pv. musacearum. This bacterium induces so much stress on the banana plants resulting into a destructive disease known as banana xanthomonas wilt (BXW), the most destructive disease of bananas in East and Central Africa.

The banana leaves, pseudostems and corms were analyzed for callose and compared with the control plants that had been inoculated with water instead of bacteria. The analysis was done using a method called S-ELISA (Sandwich Enzyme-linked immunosorbent Assay), that was designed by scientists in this study. This method is specific to callose.

Callose-specific primary antibodies were used to coat the wells of 96-well microplates followed by incubation with callose extracts from tissues of stressed plants. Additional incubation with same primary callose-specific antibodies was done, and finally, incubation with a secondary antibody that is conjugated to an enzyme. When a substrate is supplied to the enzyme, colour changes were monitored. The presence of callose (and thus stress on the plants) was assessed quantitatively by measuring the intensity of color change resulting from enzymatic action on the substrate. This method proved effective in comparison to the gold standard method of detecting and quantifying aniline blue stained callose using fluorescence microscopy.

This research was part of the PhD studies for Mr. Abubakar S. Mustafa at Makerere University and University of California, Davis. According to Mr. Mustafa, his method is new and can be applied to any plant that is subjected to any stress because generally, plants produce callose in response to stress.” Mr. Mustafa further states that the method is convenient because, if necessary, samples can be processed between a few hours to one year (or even longer), which allows exchange of materials between laboratories and countries when needed, something that was not possible before. The S-ELISA method used 96-well plates which allows high throughout studies, hence, hundreds of samples can be analyzed simultaneously within a few days.

This study has been published as a Protocol by Multidisciplinary Publishing Institute (MDPI) in an open access journal, “Methods and Protocols”, in the section: Biochemical and Chemical Analysis & Synthesis and is freely accessible on https://www.mdpi.com/2409-9279/5/4/54/htm. 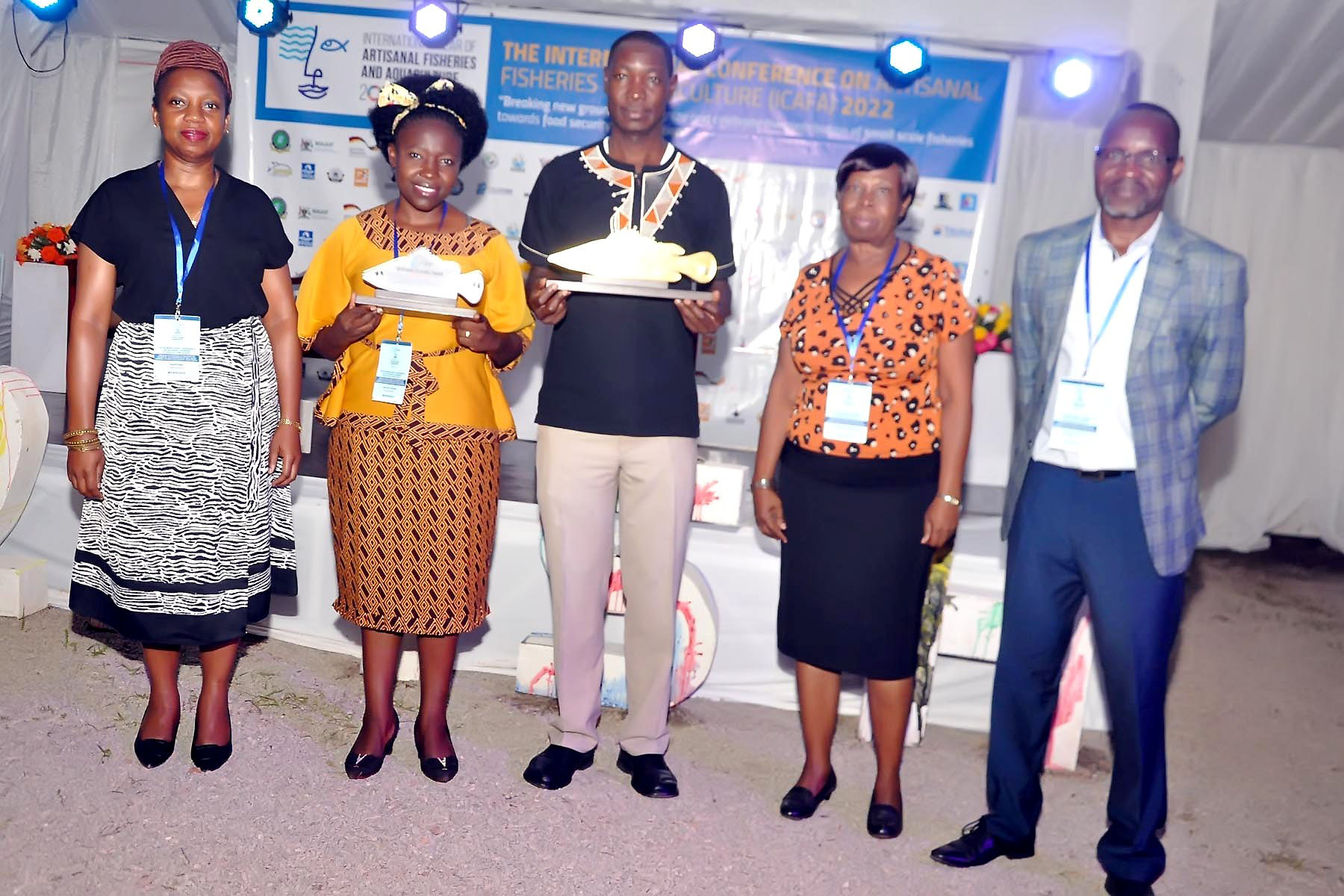 Two of the NutriFish-sponsored PhD students, Nakiyende Herbert and Julliet Nafula Ogubi won the awards for the best and second-best oral presentations in the young scientists’ category at the International Conference on Artisanal Fisheries and Aquaculture (ICAFA) held in Jinja, Uganda from 1st-3rd September 2022.  The conference was organized under the theme “Breaking new grounds to recognize and celebrate the contribution of small-scale fisheries towards food security and nutrition”.

The title for Nakiyende Herbert’s presentation was: “Are small pelagic fisheries a blessing or curse? Understanding fisher community perceptions towards light fishing on Lake Albert, Uganda”.

Light fishing, the technique of catching fish by light attraction was introduced to Lake Albert, Uganda around early 2000s, to target two small pelagic species (SPS), Engraulicypris bredoi (muziri) and Brycinus nurse (ragoogi). The introduction of light fishing coincided with a period when stocks of large-bodied fishes, such as Tilapia spp, Lates niloticus, Bagras bajad, Alestes baremose, and Hydrocynus forskahlii in the Ugandan waters of Lake Albert had started to decline. Although Lake Albert is shared by Uganda and the Democratic Republic of Congo (DRC), light fishing is prohibited in DRC waters. This study evaluated socio-ecological consequences of light fishing on the fisheries and lakeside communities of Lake Albert in Uganda, to inform sustainable management. Data was collected in April 2021 from three landing sites (Ntoroko, Kaiso, and Dei), through semi-structured interviews and focus group discussions. Light fishing has transformed the lake’s annual fish catch from < 60,000 tonnes (t) in early 2000s, mainly of large species to about 330,000 t, dominated by SPS (60 – 80%) by 2021. The SPS light fishery currently engages over 30% of total fishing boats and 60% of fishers in the Ugandan waters of the lake. The technique has also led to conflicts with fishers targeting the large-bodied species, the main concerns being: i) excessive light fishing effort; ii) competition for fishing grounds; iii) high by-catch (~10%) dominated by juveniles of the large species; and iv) destruction of passive fishing gears used in the large-bodied species fisheries. To ensure co-existence in the multi-species fishery and continued livelihood benefits (employment, income, and food) of the SPS light fishery, resting and closed periods and light-fishery effort control were proposed by 95.4% of respondents. Detailed scientific investigation of the light fishing methods is recommended, to guide on the proposed closed season and fishing effort controls.

Small pelagic fishes (SPFs) are steadily being recognized for their contribution to livelihoods, food and nutritional security especially in developing countries. The SPFs are schooling fishes with a total length of 20 cm, preserved mainly by open sun-drying.  Despite the bulk harvests, post-harvest losses associated with spoilage continue to hamper their availability, accessibility and consumption. A review of available literature on similar marine species revealed that spoilage commences immediately after harvest and progresses through three cascading but overlapping processes: autolytic (enzymatic), microbial and chemical reactions causing physical, quality, nutritional and economic losses. Spoilage in SPF is accelerated by i) their large surface to volume ratio; ii) the reliance on fluctuating sun radiation for drying which depends on prevailing weather condition; c) limited drying spaces for large quantities landed.  With regard to magnitude of losses, spoilage-related quality deterioration and nutritional changes in fish are rarely evaluated, hence associated economic value is lacking. The magnitude of losses attributed directly to the spoilage mechanisms have not been determined in freshwater SPFs, yet cost-effective interventions target significant processes. Handling practices, especially stacking and mixing of different fish hauls as drivers of spoilage mechanisms have not also been evaluated.  In addition, the effect of prolonged trips and lack of controlled temperature on-board, are less understood. Therefore, an urgent in-depth assessment of quality and nutritional losses and the associated economic value; the contribution of each spoilage mechanism to the magnitude of losses and the effect of handling practices on the rate of spoilage among freshwater SPFs is needed. 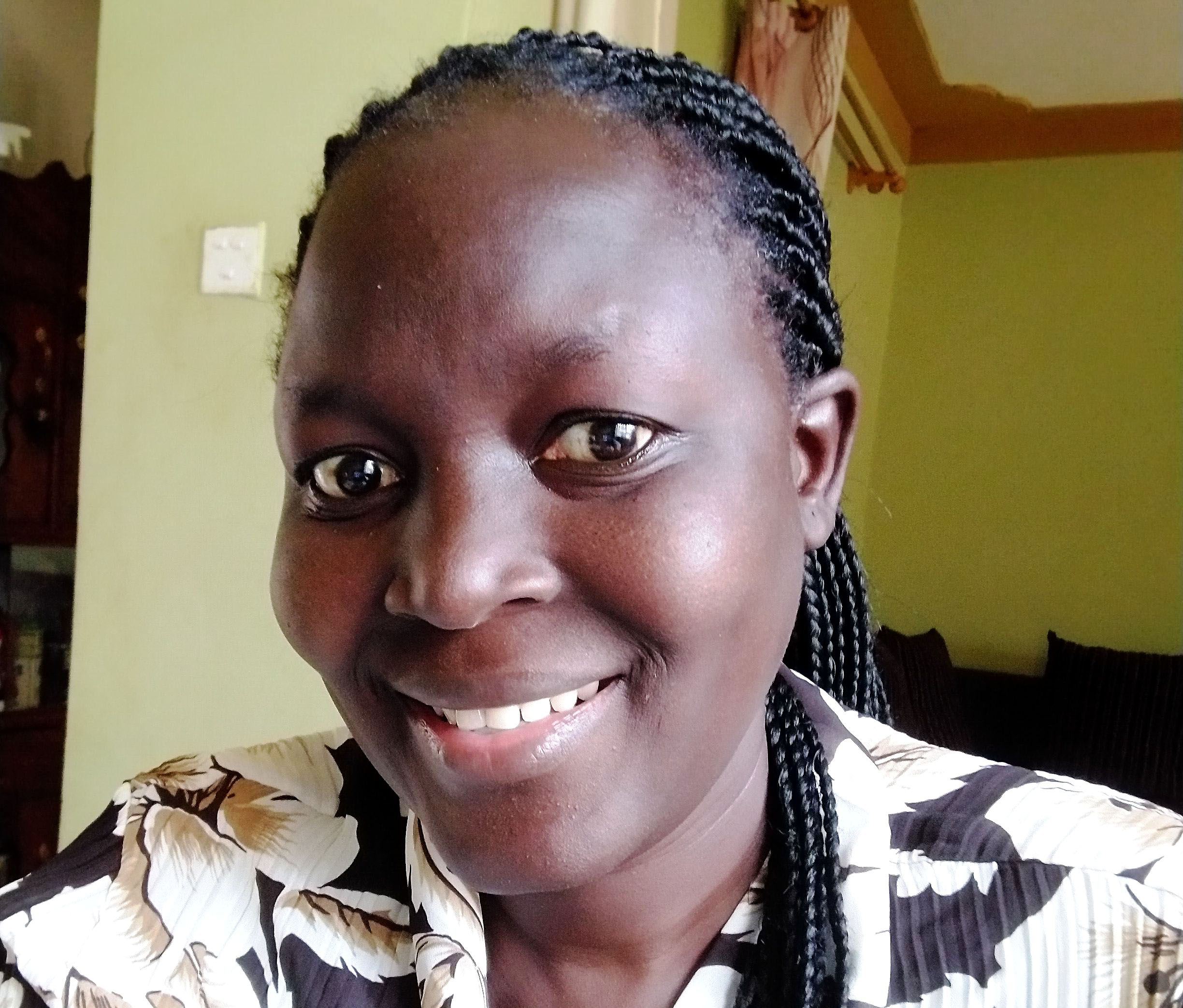 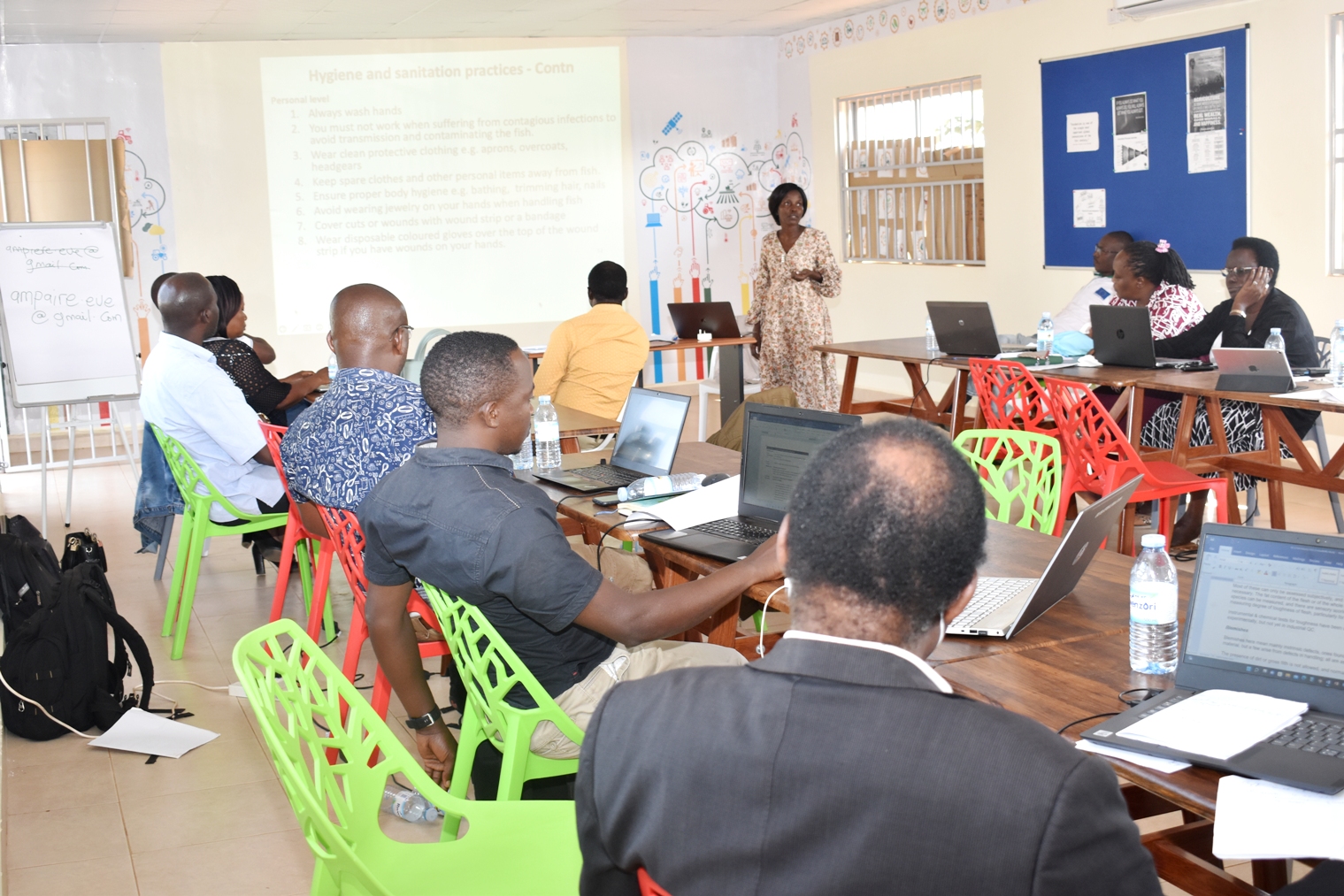 The Department of Zoology, Entomology, and Fisheries Sciences, College of Natural Sciences, Makerere University was awarded a contract under the European Union-funded PESCA project implemented by Ministry of Agriculture, Animal Industry and Fisheries (MAAIF) for the provision of training services. The overall objective of the assignment is to support training that will improve knowledge, skills, and practices that enhance aquaculture production and productivity in Uganda. This will be achieved through the following specific objectives:

The expected outputs from the short-course trainings are:

A certificate of attendance will be issued to trainees who successfully complete the training.

B. THE SHORT COURSE TRAINING OPPORTUNITY

Applications are invited for 180 fully funded bursaries for six (6) trainings covering relevant modules specified in (C) below. Each course is expected to be conducted within seven (7) days jointly with the Aquaculture Research and Development Center (ARDC), Kajjansi, National Fisheries Resources Research Institute (NAFIRRI).

Application form should be electronically filled and submitted here: https://forms.gle/52JWCEaDH1ADcbVk7. In addition, a signed recommendation from your District Fisheries Officer or Leader of Producer Organisation should also be sent to the Head of Department (eric.sande@mak.ac.ug), with a copy to the Team Leader, Dr. Jackson Efitre (jackson.efitre@mak.ac.ug), and the short courses Coordinators, Juliet Nattabi Kattabi (julliet.nattabi@mak.ac.ug) and Rosemary Nalwanga (rosemary.nalwanga@mak.ac.ug) by the deadline of 30th September, 2022 at 5:00PM.

The advert is linked below.