Prof. Christopher Mbazira, the Acting Principal of the School of Law Makerere University has received the 2021 award from Uganda Law Society (ULS) for his Distinguished service in the Promotion of Legal Education.

Professor Mbazira, who is also coordinator of the Public Interest Law Clinic (PILAC) was recognized for entrenching the use of Clinical Legal Education methodology in the training of Law students.

In a statement shared on the ULS social media platforms, it was stated that Professor Christopher Mbazira has also spearheaded the mainstreaming of Social Justice and Human Rights across the School curricular. ‘He was one of the 9 academic staff who approached the supreme Court of Uganda and were admitted as amici in the 2016 Presidential Elections.

A number of persons and organizations have applauded the ‘well deserved’ award by Uganda Law society.

The School of Law (SoL), Makerere University is a trail-blazer in the arena of legal teaching scholarship and practice, providing personnel for traditional law practice, non-governmental service, international diplomacy and academia.

At SoL, we impart quality legal knowledge and skills within an inter-disciplinary framework inspired by legal scholarship, outreach and a commitment to Justice for all, and produce
graduates well equipped to deal with new and emerging legal problems who will serve their clients and the community with integrity and excellence.

Please see below for the full Newsletter. 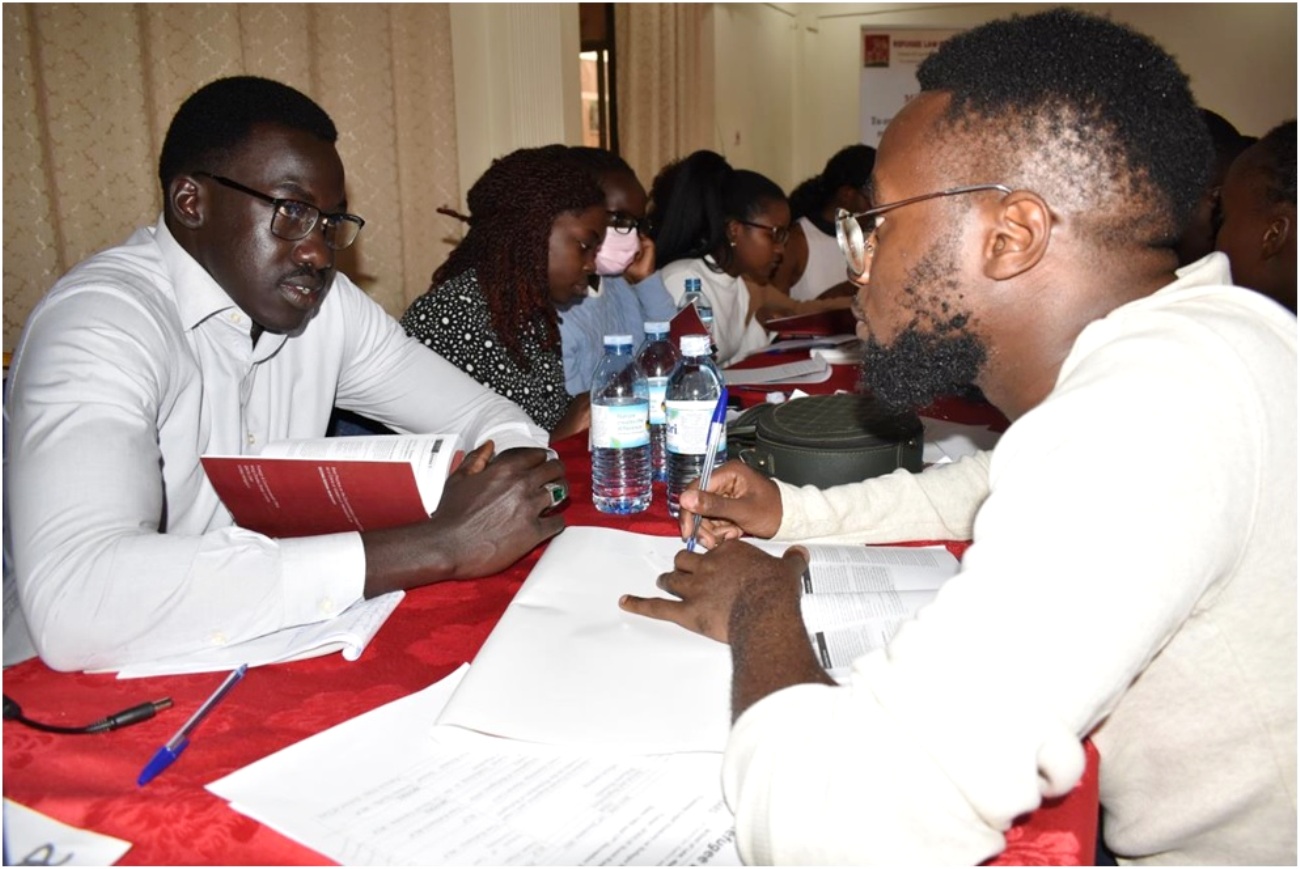 The School of Law (SoL) Clinical Legal Education (CLE) Class of 2021 was hosted by the Refugee Law Project (RLP) for a training on refugee law and rights on the 15th December 2021. The training held at JFrigh Hotel covered topics like sexual violence, legal framework on refugees, trafficking of persons, rights and obligations, transformative justice among others. The sessions were interactive and students kept engaged through the training. The training was well facilitated and as noted by one student Ms. Kemigisha Lizzan, “We were given breakfast, lunch and evening tea which helped us to keep focused since hunger was not an issue. We surely look forward to another training soon.”

On day one of the training, the students were welcomed by Ms. Susan Alupo and the team from RLP who explained what the project entails. Ms. Alupo explained that areas covered include: Access to justice, capacity building, empowerment, mental health, gender and sexuality.Introductions for all members in attendance were conducted and their expectations from the training were given including: To know the legal frame work to protect the refugees; To discuss on the sufficiency of the law in Uganda to protect the rights of refugees; To know the rights and obligations of refugees To know the experiences of refugees in Uganda; To understand the relationship between refugees and the host communities; To discover the role that students can play in refugee protection; and To learn more about transitional justice and how effective it is in resolving conflict.

Ms. Tina Kalitanyi facilitated Session 1: Introduction to Forced Migration and Legal Frameworks on the Protection of Refugees. Ms. Kalitanyi presented to the students the international, regional and domestic legal framework of refugee law. The presentation highlighted; the Universal Declaration of Human Rights, 1951 Convention on the State of Refugees, the 1967 optional protocol and guiding principles, the 1969 O.A.U Convention, the 1995 Uganda constitution, the Uganda National Internally Displaced Persons policy, the Refugee Act and Refugee regulations. The REHOP policy was also pointed out as the policy that requires 70 percent of assistance to refugees and 30percent to host communities while assisting refugees.

Session two covered Rights and Obligations of Refugees while In the host country. This session commenced with a documentary titled ‘Human Lava’ after which students discussed their opinions on the contents of the video. Some of the aspects pointed out included: registration of refugees at the transit centres which are the border areas where refugees converge first; special needs groups are given attention and priority;  relationships with the local people is tense at times because refugees are seen as competition for resources as well as destruction of property at the places they settle. It was concluded that refugees enjoy all rights that are enjoyed by citizens. However, they cannot participate in the politics of their host country because that would create tension in the settlements. Refugees are allowed to vote for their leaders in the settlements as well as own land on leasehold. The obligations of refugees include to respect the laws of Uganda and to pay taxes if involved in gainful employment.

Dr. David Tshimba Facilitated Session 3; Understanding Human Trafficking In the Context of Forced Migration. The session covered the definition of trafficking of persons highlighted the legal framework against trafficking of persons. The protocols covered included the Banjul Convention, the Palermo Protocol, 2000, the UN Convention against Transnational Organised Crime (UNCTOC), the Uganda Prevention of Trafficking in Persons Act (PTIP), 2009. Dr. Tshimba pointed out the criticisms of the Parlemo convention for the prevention, suppression and punishment of perpetrators of trafficking in persons and this is that it focuses on prosecution and ignores restitution or assistance of victims of human trafficking. A discussion on the problems that are advancing the phenomenon of trafficking in persons was conducted like the advancement of technology and the internet which grants anonymity and disregards geopolitics, a hard to regulate globalization where it is not easy to enforce these International laws as compared to National laws.

Session 4: Understanding Conflict- Related Sexual Violence was facilitated by Ms. Doreen Oyella highlighting sexual violence in the context of conflict (SVC); potential perpetrators of SVC; victims/ survivors of SVC and what makes them vulnerable. It was noted that sexual violence is used as a weapon of war, to cause terror, to assert power and as a systematic attack against communities. It was also discussed that perpetrators can be soldiers including state soldiers, civilians. The facilitator took the students through the misconceptions on sexual violence which include that men cannot be raped.

The training continued on day two with a recap of work covered on day 1 where students talked about the take away from the previous sessions and Mr. Veve Richard thanked them for paying attention and being good learners. The sessions for day 2 included Understanding Mental Health in the Context of Forced Migration facilitated by Mr. Akulla Ssubi and Understanding Conflict, Transitional Justice and forced Migration facilitated by Mr. Veve Richard. 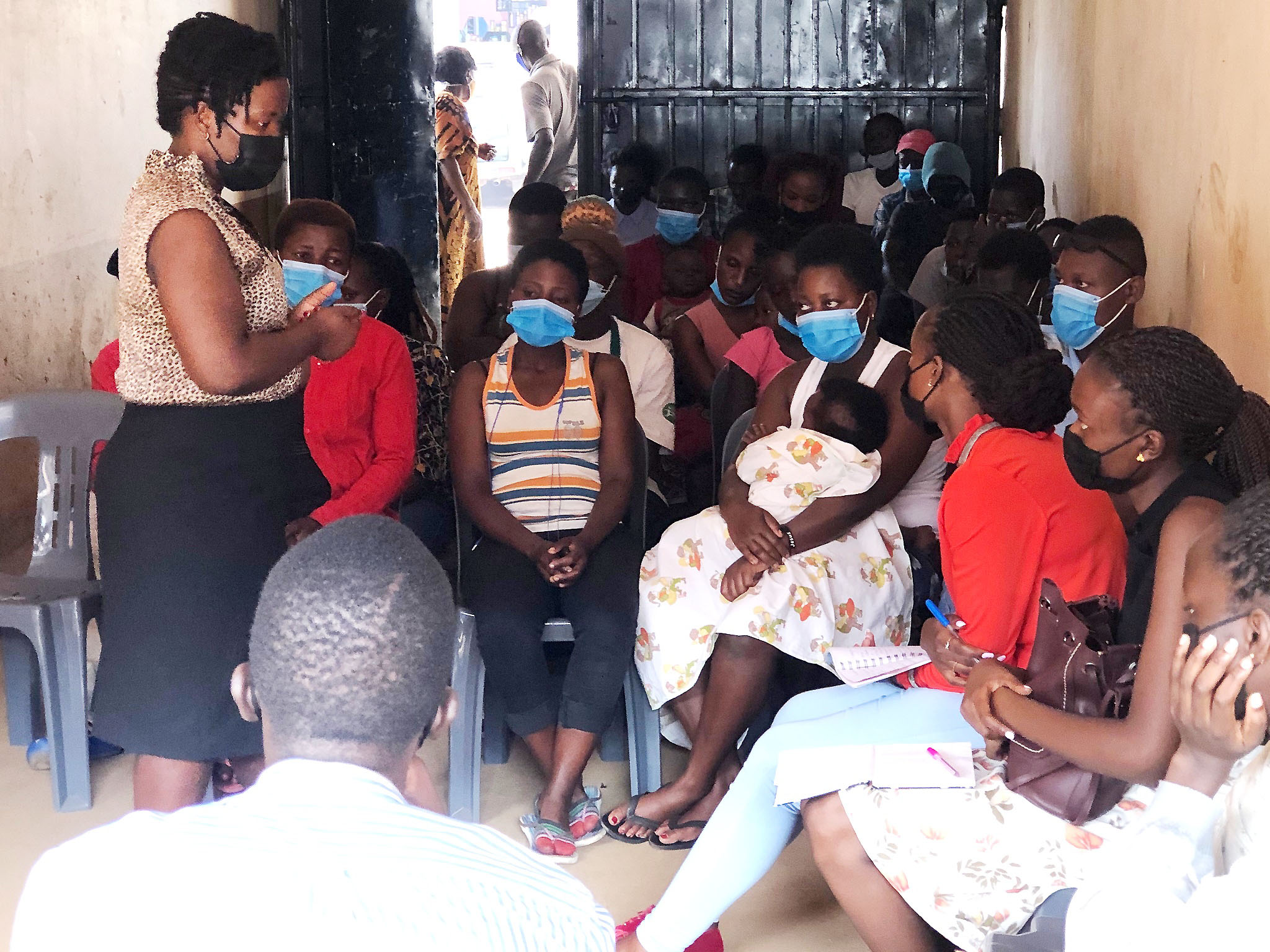 “We are supposed to be moving from the league of asking ourselves what is our ranking in the country, on the continent, in the world to asking ourselves, what is that impact in society which is clearly attributed to Makerere” These were words of Mr. Yusuf Kiranda, University Secretary – Makerere University during a stakeholder engagement event on the 25th November 2021, one of the events that the university will host to mark 100 years of Makerere’s journey.

Relating to the call by the University Secretary, the Makerere University, School of Law (SoL) is providing services responsive to societal needs through Externships. Externships introduced in 2013 by the SoL through the Public Interest Law Clinic (PILAC) are legal aid clinics, in which students are grouped and placed in various learning environments including partner offices or communities to provide legal support and community literacy. The students also get the opportunity to appreciate real life cases and provide legal advice under the supervision of a Lecturer/Advocate. By so doing students see the relevance or even inadequacy of the law alone on solving of client problems.

Public Interest Law Clinic (PILAC) is a premier University Based Law Clinic in Uganda affiliated to Makerere School of Law. It was established in 2012 and is accredited to provide legal aid services by Uganda Law Council. PILAC uses hands-on experiential learning to teach future lawyers attached to Makerere School of Law skills and techniques of solving cases using non-legal and legal solutions with a human rights face-social justice and public interest lawyering.

This year, 30 3rd year students offering Clinical Legal Education (CLE) elective have been placed in four (4) groups in  slum communities: Katanga, Kivulu, Kikubamutwe and Kimombasa. These are all communities adjacent to the university and with various legal needs. The externship in Katanga was held on the 16th December, 2021 where the students were accompanied by Ms. Diana Ahumuza Ateenyi, Lecturer at the SoL.

The SoL team found members of the community already assembled and ready for the engagement. In her opening remarks, Ms. Keloyi Kabahweza, Community Liaison for PILAC in Katanga Slum welcomed the SoL team and thanked PILAC for supporting the community. Ms. Kabahwezi expressed appreciation of the legal aid services offered which the community would not otherwise afford.

Ms. Ahumuza as Team Leader from SoL introduced the members in the Makerere University, SoL team. She thanked the community for the warm welcome extended and time keeping. She further explained that the main issue to be discussed at this meeting was business and the law including saving groups and how to establish them legally. Ms. Ahumuza stressed that while business was the main issue of discussion, other legal questions from the community would be attended to.

Students presented to the community how to establish saving groups/ SACCOS highlighting the legalities entailed. The confidence exhibited by the students was encouraging despite the use of Luganda as the local language for better understanding by the community. The members of the community attending remained attentive throughout the meeting and asked multiple questions. Some of the issues arising during the discussions included: registering SACCOS and the red-tape involved, documentation and record keeping, trust among members, preparing constitutions for SACCOS and money lending.

Other issues discussed included: Wills and succession, Police bond, Money Lenders Act, Child Abuse, Sexual Abuse and domestic violence. The members reiterated their appreciation of the services provided by SoL/PILAC and advised that leaders require special training. It was noted that many times, the leaders abuse the law and take advantage of their vulnerable constituents; they often side with wrong-doers as well as selling community property like land.

In her closing remarks, Ms. Diana Ahumuza advised the community that PILAC doors are open to all those persons who require further assistance. She further explained that services are free and everybody is welcome.

It should be noted that: