Makerere University researchers under Trauma, Injuries and Disability (TRIAD) Unit) have designed a national drowning prevention strategy. This strategy comes at a time when there is sky rocketing cases of drowning in Africa.

Globally, drowning is the third leading cause of unintentional injury death; accounting   for 7% of all injuries. Over 90% of the estimated 322,000 annual global drowning deaths occur in low-and middle-income countries.

Although the burden of drowning is believed to be highest in the WHO-African region, data collection and surveillance for drowning in African countries is limited.

In bid to contribute to data driven interventions, Makerere University researchers carried out a study aimed at establishing the availability of drowning data in district-level sources and understanding the reporting of and record keeping on drowning in Uganda.

As part of the study titled: Drowning in Uganda; examining data from administrative sources, researchers engaged various health stakeholders who shared their experiences about drowning and how it can be prevented in communities.

It is upon that background that scholars designed a contextual appropriate strategy for drowning prevention in Uganda under the project titled; Drowning in Uganda; examining data from administrative sources.

According to the researchers, this drowning strategy is first ever in Uganda. ‘’it will be a national document that will guide all the efforts on drowning prevention in the country; and will avoid non-coordinated activities aimed at prevention of drowning. the strategy will also provide for monitoring and evaluation of all activities and interventions for drowning prevention in the country since there will be a government lead agency tasked with this responsibility’ ’explained Mr. Fredrick Oporia who is part of the study team

In this study published on semantics scholar among other journals, the researchers came up with the following   strategies to counter drowning;

• Setting and enforcing safe boating regulations. • Providing incentives that encourage adherence to boating regulations related to not overloading transport boats and increasing enforcement of boating regulations. • Ensuring boats are fit for purpose and increasing regular inspection of the seaworthiness of boats. • Improving detection and dissemination of information about the weather. • Supporting increased availability and use of lifejackets through subsidy, lifejacket loaner programs, and free lifejacket distribution programs. • Increasing sensitization about safe boating practices, the importance of wearing lifejackets, and limiting alcohol and illicit drug use when boating. Community members, especially children, are vulnerable to drowning in unsafe water sources such as ditches, latrines, wells, and dams. Potential interventions could include: • Modifying access to wells and dams to prevent children or adults from falling in. • Installing boreholes and pumps to enable community members to draw water safely.

Providing safe rescue and resuscitation training to community members and conducting refresher trainings. • Developing and providing low-cost rescue equipment such as boat fenders (rubber and ropes tied to boat on all sides that can assist in the immediate rescue of individuals) and buoyant throwing aids.

To enable ongoing design, implementation, and evaluation of drowning prevention efforts, the researchers note that it is essential to collect data on drowning incidents. Reporting of and record keeping on drowning in Uganda should  also be  improve  according to the researchers  namely; Tessa Clemens, Frederick Oporia, Erin M Parker, Merissa, A Yellman,  Michael F Ballesteros and  Olive Kobusingye

Other Potential interventions highlighted by the researchers include: • Providing records officers with proper training, equipment, and appropriate storage facilities. • Sensitizing the public on the importance of reporting all drowning cases to authorities.

As part of their study findings, the researchers noted that; A total of 1435 fatal and non-fatal drowning cases were recorded; 1009 (70%) in lakeside districts and 426 (30%) in non-lakeside districts.

On demographics, fatal victims were predominantly male (85%), and the average age was 24 years. In lakeside districts, 81% of fatal cases with a known activity at the time of drowning involved boating.

What were people doing when they drowned?

• Overall, boating was by far the most common activity that people were engaged in at the time of the drowning incident.

• Other common activities were collecting water/watering cattle and travelling on foot.

• Almost half (48%) of all drownings occurred while the person was engaged in an occupational activity.

Of the 1,063 people who died from boating-related drowning or suffered a severe boating related drowning incident but survived, 1,007 (95%) were not wearing a lifejacket at the time of the incident.

Attempting to cross flooded rivers and streams during the rainy season was another cause of drowning identified by study participants.

“Currently, people cross from makeshift bridges such as that of round poles. When the river overflows, it covers them. So, you can’t see them; so, you just start guessing: ‘the pole might be here or there’ and in case your guess is wrong, you automatically drown and you will be gone.” an Interview respondent in   Kabale district explained

Delayed rescue attempts: Study participants identified the importance of timely rescue and resuscitation to prevent death from drowning. However, they also indicated that community members lack knowledge on how to rescue someone who is drowning.

Alcohol use: Several participants identified alcohol use as a key risk factor for drowning. Participants stated that alcohol use is common, especially in fishing communities. “We have a problem with alcoholism. Many of our colleagues go to the waters when their minds are a bit twisted by the alcohol and on some occasions, this has caused accidents and some of them have drowned just like that.” – Interview respondent, Nakasongola district.

• Provide affordable and high-quality lifejackets to all water transport users and fishing communities. • Increase sensitization of fishermen and all water transport users on the importance of using lifejackets and avoiding alcohol while boating. • Provide subsidies for large and motorized boats that can be used for safe water travel and fishing to replace small and low-quality boats that are currently in use.

Inspect boats regularly to ensure they are in good travelling condition. • Recruit and deploy more marine police units on all major water bodies to enhance security and quick response to drowning incidents. • Install boat fenders (rubber and ropes tied to boat on all sides) to assist with the immediate rescue of individuals who are involved in a drowning incident. • Provide frequent and safe ferry services to enable water travellers access to safe transportation across rivers and lakes. • Avoid fishing during the moonlight periods to minimize hippopotamus attacks which are more frequent at that time.

“I think these fishermen really need lifejackets for their work and also need to be sensitized on how to manage the engine of the boats that they use for their work. In most cases, these men just learn how to use these boats without having been trained first.” – Interview respondent, Rakai district. Swimming and basic rescue skills said

Moving forward, the researchers recommend that since; drowning is a multisectoral issue, and all stakeholders (local and national government, water transport, water sport, education, fishing, health, and law enforcement) should coordinate to develop a national water safety strategy and action plan.

In the second phase, a total of 2,066 drowning cases were identified in 14 districts by community health workers and confirmed through individual interviews with witnesses/family members/friends and survivors of drowning. This work was funded by Bloomberg Philanthropies through the CDC Foundation 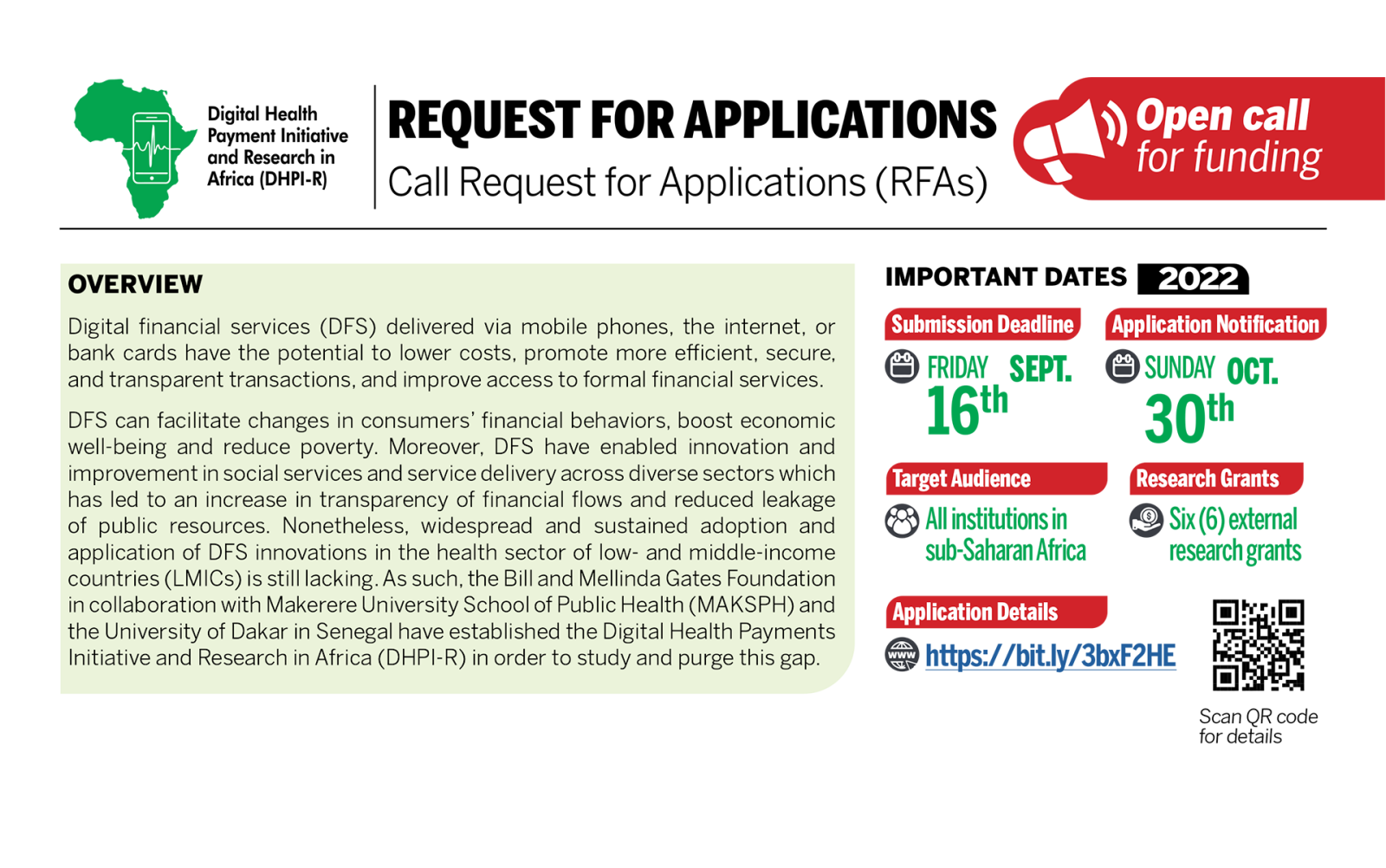 The Digital Health Payment Initiative and Research in Africa (DHPI-R), a Bill and Melinda Gates Foundation-funded project that is implemented in Makerere University School of Public Health (MakSPH) and Université Cheikh Anta Diop de Dakar (UCAD) Senegal is thrilled to announce an OPEN CALL FOR REQUEST FOR APPLICATIONS. This will foster widespread, sustainable adoption and application of Digital Financial Service innovations within the health sector of low-and-middle-income countries (LMICs) in sub-Saharan Africa.

DHPI-R is seeking applications for studies that address the evidence gaps listed.

All Institutions within sub-Saharan Africa

The award will be a fixed fee agreement, and the total amount of the award will be stated in the award letter. The funding is intended to support the collection, analysis, and dissemination of research. The allocation of program funds will directly correspond to the monetary figures presented in the final Budget and disbursement of funds will be initiated upon the timely receipt of invoices, financial reports, and expected deliverables.

Applications must be submitted in English or in French.

Applications must be submitted through our website: Submit applications here.

Award decisions: All applicants will be notified of the outcome of their submission by 30th October 2022.

For more information and application details, see; Call for Request for Applications 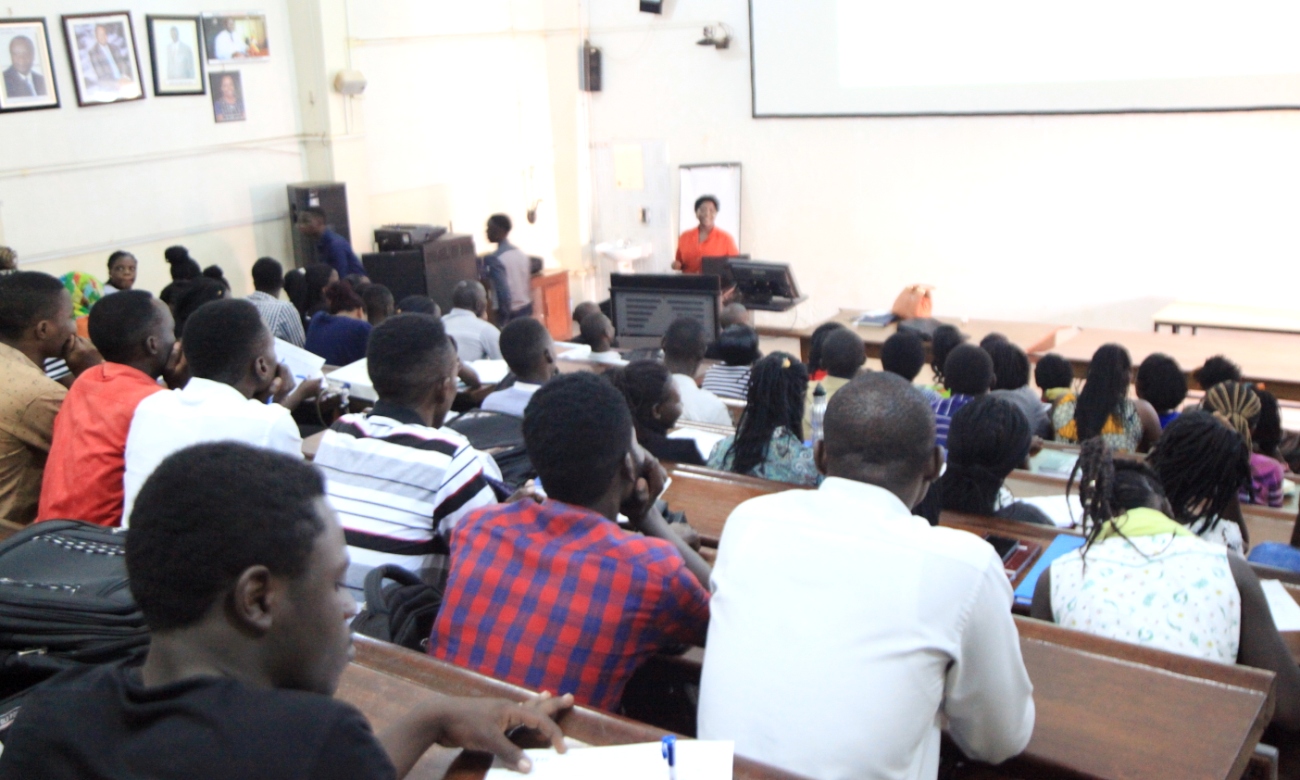 See flyer below for more details on eligibility 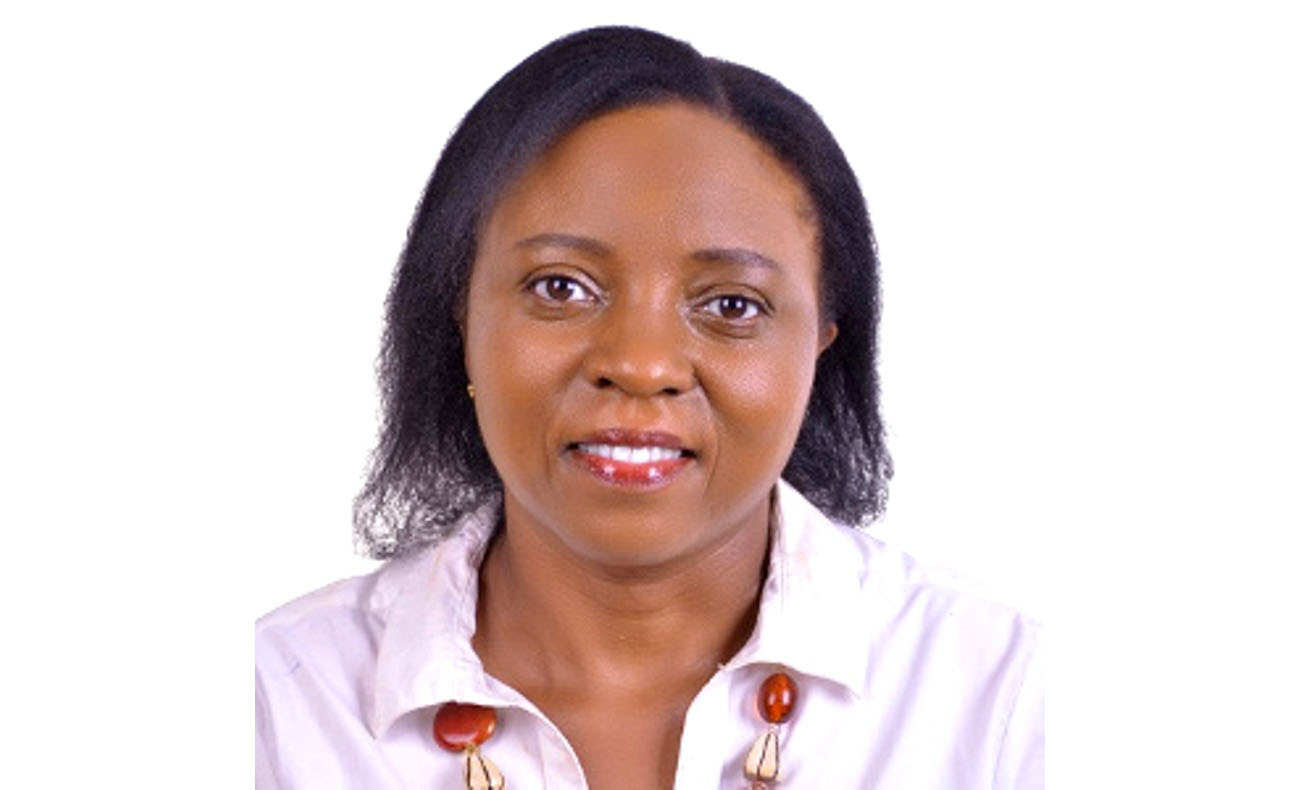 I hereby present to you the Makerere University College of Health Sciences (MakCHS) annual report for 2021. This report provides an overview of activities at MakCHS under our mandates of teaching and learning, research, and service delivery during 2021.

It is my pleasure to congratulate all staff who have received promotions, new research fund awards and publications during this period. You continue to raise the bar of the College of Health Sciences as we strive to lead in providing transformational education and research to improve service delivery and well-being of all the communities we serve. I extend my gratitude to all our stakeholders including but not limited to all MakCHS staff, students, alumni, collaborators, partners, funders, patients, and doctors for the exemplary multi-disciplinary teams that continue to deliver high quality education and health care programs.

Our major challenge remains to innovate, develop, produce, and sustain local solutions to emerging global health challenges including the large burden of emerging and re-emerging infections as well as the burden of non-communicable diseases.

I therefore urge all faculty and students to seek and grab all opportunities for each one to utilise their role in this space as we advance science initiatives to impact lives in Uganda, Africa and globally. On behalf of the leadership at MakCHS, I pledge our unwavering efforts to provide all relevant support to facilitate you to achieve your career dreams for 2022 at MakCHS.