Looking at the intersectionality of security, peace and development, the meeting explored specifically the role of the UPDF in advancing Uganda’s National Development aspirations and more broadly its contribution in the attainment of the Sustainable Development Goals particularly Goal No. 16. With growing debate on the involvement of military in a number of sectors in Uganda such as, agriculture (Operation Wealth Creation), the wildlife and forest conservation (UWA & NFA), the water resource sector (fisheries) and, the oil and mineral resources (MPPU), there is hardly any scholarly analysis on such phenomenon, a gap that HURIPEC seeks to bridge. The UPDF established under the Constitution of the Republic of Uganda, 1995, Article 208 and Article 209 (b) is required to cooperate with civilian authority such as Police and as provided in the UPDF Act, engage in productive activities. This meeting explored further the nature, contributions, impact and effectiveness of the military interventions in the ‘security in development’ discourse. Interestingly, the increasing shift of the UPDF from its primary role in defending the territorial integrity of the State to its vivid involvement in development sectors needs a much deeper analysis and inquiry particularly on the aspects of functionality of such sector institutions. The temptation to engage in the national economy beyond the traditional defense economy partly lies in the question of national interests one of which is building strong institutions including the military. 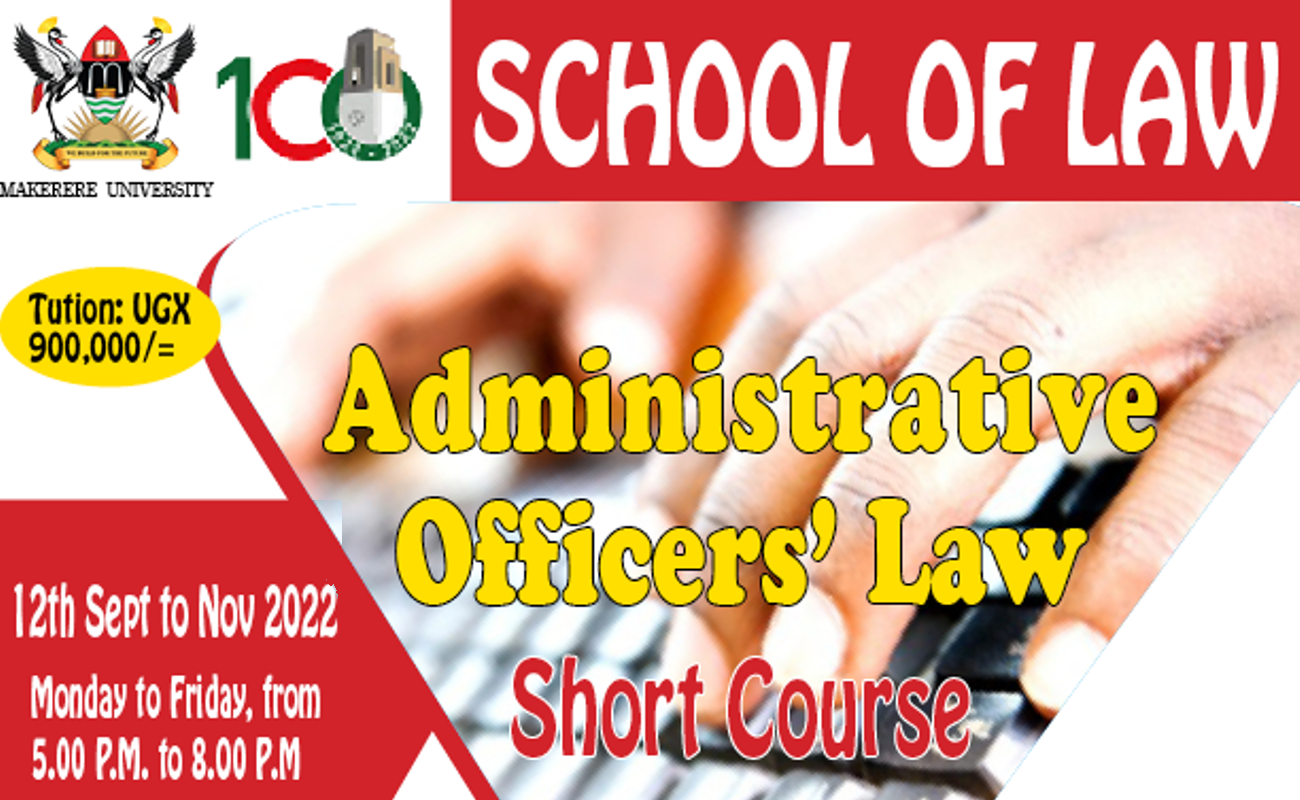 Makerere University School of Law invites applications for admission to the Administrative Officers’ Law Short Course for the KAMPALA CENTRE that will run for two (2) months during the period (12th Sept. to Nov. 2022). The course will start on Monday 12th Sept.  2022 at the School of Law premises. Classes will be conducted from Monday to Friday, between 5.00 P.M. to 8.00 P.M.

The tuition for the course is UGX 900,000/= and the application fee is UGX 50,000/= plus bank charge of UGX 2,750/=. Payments should be made to Makerere University/Uganda Revenue Authority, using a Deposit Reference Number (DRN) obtained from the Office of the Bursar of the School. Please contact Mr. Rolland Mpiriirwe on 0777699887/0701338259 or rmpiriirwe@gmail.com/ rmpiriirwe@law.mak.ac.ug

The minimum admission requirement for the course is ‘A’Level or its equivalent.

We also have other centres in Tororo, Jinja, Mukono, Mityana, Masaka, Arua, Lira, Gulu, Moroto on weekends, for (9 weekends).

Ndagire Joyce Irene (Administrator) on 0772498954/0701498954 or  joyce.ndagire@mak.ac.ug/ ndagirejoys@gmail.com, Department of Public and Comparative Law, for Application forms and also a soft copy can be sent

Desk Officers for the Centres 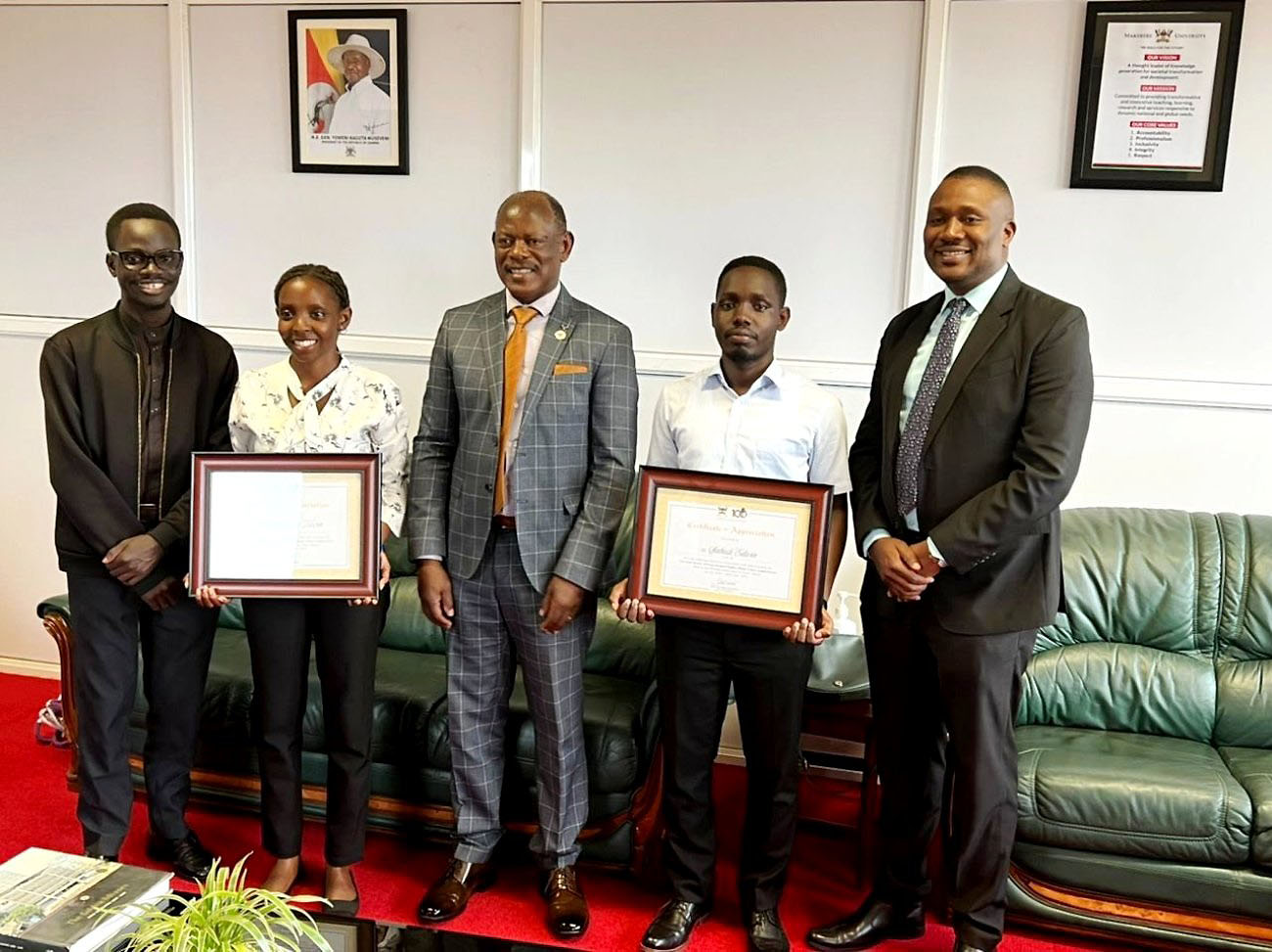 The All Africa Moot Competition is named after Professor Christof Heyns (1959-2021)who was a Professor of Human Rights Law, Director of the Institute for International and Comparative Law in Africa at the University of Pretoria and a member of the United Nations Human Rights Committee. The 2022 edition attracted a total of 50 Law Schools, 38 of these were English speakers.

The Vice Chancellor hosted the winning team in his Office on Thursday, 4th August, 2022 and presented Certificates of Recognition to Kevin and Edwin for making Makerere University proud. Dr. Daniel Ruhweza, Lecturer at SoL and Patron of the Makerere University Moot Society and Mr. David Kasibante, alumni – SoL and team coach also attended the presentation.

Explaining to the Vice Chancellor, Dr. Ruhweza said, “We are happy that you have hosted this team which worked so hard to bring the trophy home”. He also highlighted the rigorous process through which the team that represented Makerere University was selected.

In his remarks, Professor Nawangwe said, “I congratulate you for winning the competition and making Makerere University proud, more especially in this centennial year of celebration for the institution. Thank you for flying the Makerere flag high which instils confidence that the University and our School of Law are centres of excellence”. He commended the team for their commitment and doing their best to represent Makerere University. Professor Nawangwe also thanked Dr. Ruhweza for committing time to support the students. He added, “this is an activity that should be supported and I will present it to the University Council for inclusion in the budget for financial year 2023/2024”.

Sharing their experience from attending the competition, Kevin and Edwin explained to the Vice Chancellor what is entailed in participating.

“The Moot was very challenging in-terms of preparing for the competition while balancing it with class work; the processing of travel documents and visas was also quiet hard. We are grateful that you have hosted us here today and also the support of the SoL, University that enabled us to triumph despite the challenges”, Ms. Nakimbugwe said. Kevin added, “we are a brilliant team and our win is evidence”.

Edwin Sabiiti who is also the President of the Makerere University Moot Society said, “the society organises internal moots, identifies the students to represent the University at various competitions. We participate in several competitions within the country, continent and internationally, only that this is the most prestigious. Makerere University are reigning champions of the national Center for Health, Human Rights and Development (CEHURD) Moot Court Competition”.

Edwin further explained that mooting is an opportunity to learn as well as apply the law that we learn in class. He expressed that the University should consider inclusion of mooting as a course unit on the academic transcript because a lot of time is spent in preparing for the various competitions. Edwin also requested that the University extends a supporting arm in facilitating preparations for the various moots that the students participate in.

Read more about the Competition:https://www.chr.up.ac.za/moot#:~:text=The%20Christof%20Heyns%20African%20Human,of%20human%20rights%20in%20Africa 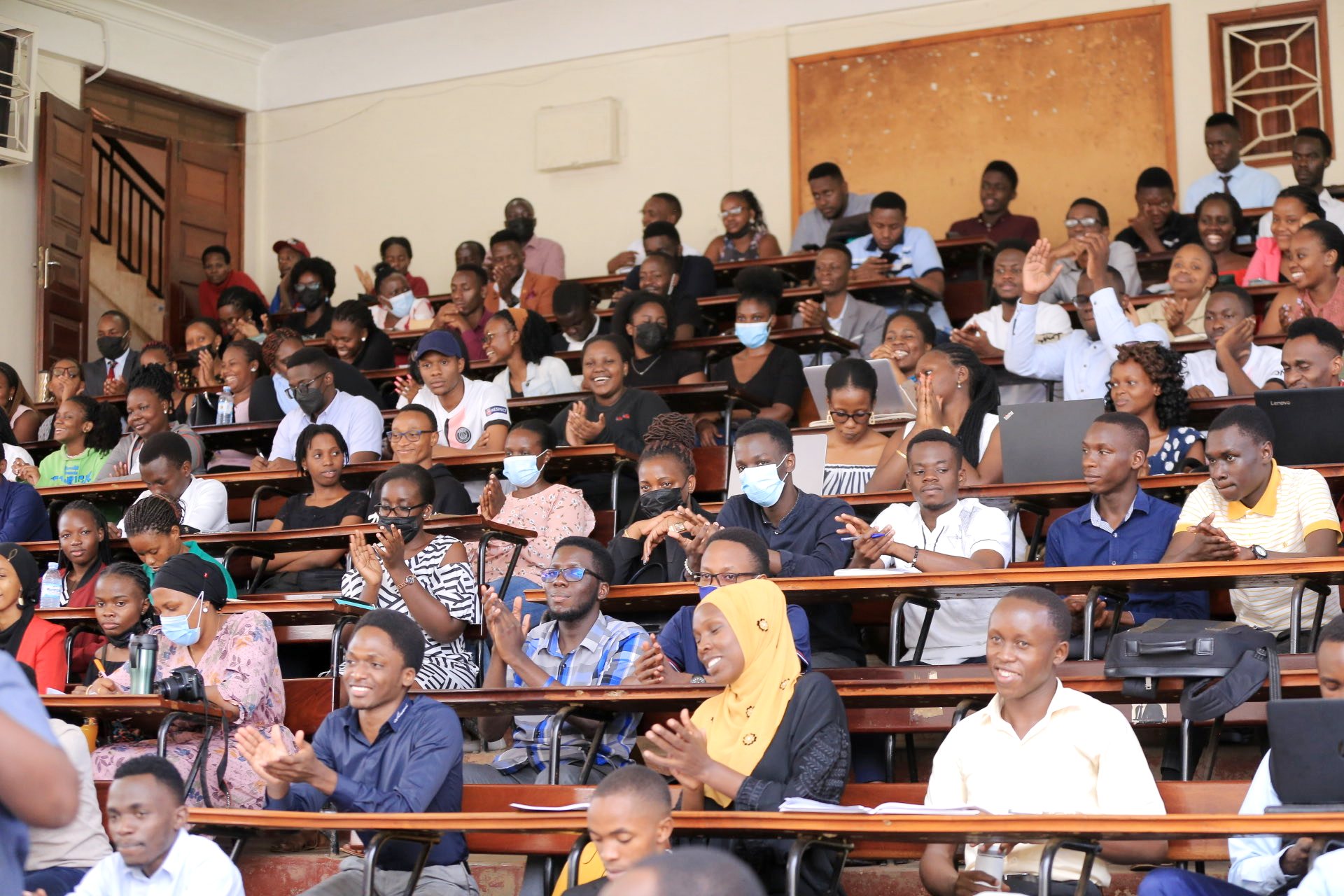 The Makerere University School of Law (SoL) held the Inaugural Makerere Law Journal (MLJ) Symposium on 17th June 2022 under the theme, ‘Charting the Course and Diversifying Scholarly Content’. The symposium was held to give opportunity to authors of outstanding papers in recent issues of the MLJ to present their work to the general membership of the Makerere Law Society (MLS) and the public. The symposium was supported by the Public Interest Law Clinic (PILAC), SoL.

The MLJ is a student-edited law journal published by the SoL under the auspices of the law students’ union, MLS. The journal founded in 1971 considers submissions from legal writers, students, and scholars within Uganda and beyond. Quoting the pioneer editor of the MLJ, Daniel Omara Atubo, ‘the journal was intended as a medium for discourse on the immense problems of law’. The submissions may be for education purposes; aimed at causing law reform in the jurisprudence of Uganda or other African jurisdictions on matters of legal doctrine and philosophy; human rights; public policy; governance; economics among others.

Previously, the MLJ was printed annually, however, it is now a free-access online publication that considers, reviews and publishes submissions on a rolling year basis throughout the year. Access issues of the MLJ here: https://makererelawjournal.org/. At the inaugural symposium four papers were presented and interrogated by subject experts. Highlights of the papers are detailed below.

Tukwatanise Hans Rwantangare presented his paper titled, ‘A Case for The Application of the Theory of Deferred Indefeasibility in Uganda as an Instrument to Promote Indefeasibility of Title Under the Registration of Titles Act’. Abstract: The theory of deferred indefeasibility as opposed to immediate indefeasibility is presented as a means to improve security of title today. A comparison is made of the relative merits and demerits of the two theories of deferred and immediate indefeasibility. In so doing, the aim is to reconcile the outdated theory of immediate indefeasibility with the modern legal regime and to preserve its relevance in the prevailing socio-economic situation. In a comparative analysis, other jurisdictions, especially Canada are studied to ascertain how they have evolved their interpretation of the same. Inevitably, indefeasibility, as a concept of real property is analysed considering human rights perspectives as relatively impacted by the two theories.For more about Hans’ paper click: https://makererelawjournal.org/view-publication/35. The paper was discussed by  Dr. Rose Nakayi, Senior Lecturer at SoL. Dr. Nakayi is a seasoned expert in land law and rights and an advocate for the reform of the mailo land tenure system.

Fatumah Ramathan-Nabulya presented her paper which had reviewed a case Baryamureeba V Kabakonjo Abwooli. In her review she argued that it was ‘A Win for Women’s Property Rights in Cohabitation’. Abstract: Marriage, especially at its dissolution, tends to be contentious owing to its cross cutting effects on property rights, children custody, spousal maintenance among others. It is more complex when that “union” is not legally recognized. Over 65% of Uganda’s couples are left out under the law because their arrangements are not contracted in accordance with the laws provided for. This potentially subjects women to unequal social laws (patriarchy) usually with no legal remedies. Hence, marriage, due to its overarching effects, can be breeding ground for the entrenchment of gender inequality. This paper reviews a High Court decision through which judicial activism is employed to lessen the plight of cohabiting women. Due to the time they have been in operation, it is often difficult to see our matrimonial laws for what they really are; patriarchal and gender indiscriminate. There is need for Judges to be fully alive to the history of these laws and the debates that led to their passing, to correct the wrongs of history.For more about Fatumah’s paper click: https://makererelawjournal.org/view-publication/23. Dr. Diana Musoke, Senior Lecturer, Islamic University in Uganda and expert on family law discussed the paper.

‘The Human Rights Implications of Uganda’s Borrowing’ paper was presented by Ruth Muhawe. Abstract: The relationship between the sovereign debt of developing countries and the protection of the social rights of citizens in those countries has received considerable analysis from the economic, political and moral perspectives, but relatively little has been written from the legal point of view. Consequently, this paper provides legal insights into the lingering crisis that sovereign debt poses to human rights, with a specific focus on the economy of Uganda. The paper is particularly concerned with examining what Uganda’s debt burden means for the basic observance and enjoyment of human rights by its citizens of both the present and the future.For more about Ruth’s paper click: https://makererelawjournal.org/issues (MLJ 2019 Issue) A constitutional law and international law expert, Dr. Busingye Kabumba, Senior Lecturer at SoL was the discussant of the paper.

A joint paper titled, ‘The Legal Risks of Cryptocurrency On State Sovereignty; A Case Study of Uganda’ was presented by Ntamugabumwe Victor & Joshua Kingdom. Abstract:State sovereignty is conventionally known to mean that all states are equal under Public International Law, the decisive criterion being effective power over territory and people. Indeed, the most rudimentary definition of a state is the organization of power over territory and people within that territory. However, sovereignty today depends much on the state’s monetary independence – the state’s capacity to control the flow of money and currency in their jurisdiction. With the constant evolution of money transactions from Cash to credit and then to crypto, the state must always be ready for each revolution so that sovereignty is kept. Cryptocurrencies work outside the existing legal financial framework and as such avoid the state’s invented structure to control their monetary policies, stability to achieve sovereignty.For more about the paper click: https://makererelawjournal.org/view-publication/17